Catawba Valley Community College music student Noah Messick takes the national stage this weekend for his chance to build on the legacy of the college’s music program. 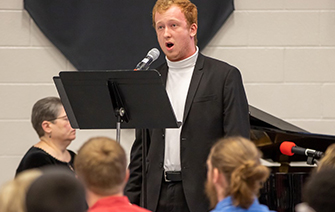 Messick is competing at the National Association of Teachers of Singing (NATS) National Student Auditions this weekend at Roosevelt University in Chicago.

This will be the first time Messick has been able to perform his pieces live after previously recording them for NATS competition.

“It definitely has motivated me a lot more,” Messick said of performing live. “You only get one shot this time, and that’s it. With all the time I’ve had this month, I’ve been working on my music and getting that down pat. I’ve tried to get that super strong to be prepared for that one take.”

CVCC music instructor Caroline Simyon is excited for her student Messick to get a once-in-a-lifetime experience of performing live in Chicago.

“I think what he will enjoy the most is the energy in the room,” Simyon said. “It’s infectious. He will play off that energy. That’s something you can’t get when you record in front of a camera. Singing in front of those judges will be like no other.”

This is the seventh time that a student in the Catawba Valley Community College’s music program has performed in the final stages of the NATS national competition — four in music theater, two in spiritual.

Messick is the first to reach this level in the classical music category, and he is one of the final 14 freshman and sophomore competitors nationally in the category.

Since the end of the spring semester at CVCC, Messick has been practicing to prepare for the competition at his grandparent’s church — Plateau United Methodist in Vale.

“The church has given me massive support,” Messick said. “Being able to have a place to practice has really helped me this month. You have no one disturbing you. No one is banging on your door to stop. It’s really helped me a lot.”

Messick also performed at the Red Hawk Awards ceremony on CVCC’s campus earlier this spring, and he believes the experience will also benefit him during NATS nationals this weekend.

“That’s probably the biggest crowd I’ve performed in front of,” Messick said of singing at the Red Hawk Awards.

If he advances past the semifinal stage, he will compete later Saturday afternoon with the chance to finish in the top-three nationally in his classical music category. In the past, NATS national competitors would have an extra day to prepare for the final round of competition.

Messick isn’t phased by the short time frame in between semifinal and final round competition.

“There’s pros and cons, but I’m more of a fan doing it the same day, but the songs are still going to be set in stone,” he said.

Simyon is excited for Messick, and she’s going to give him the best advice she can before he takes the stage in front of the three to four NATS judges.

“We’ll have 12 hours in the car discussing all of this,” she said. “His CVCC classmates are 100 percent behind him.”