The comeback story for Catawba Valley Community College alumnus Josh Proby continued this week when it was announced that he had been awarded a two-book publishing contract for Christian Faith Publishing. 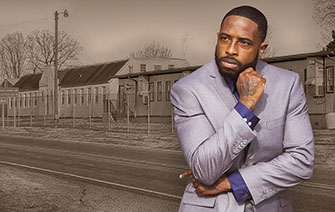 The comeback story for Catawba Valley Community College alumnus Josh Proby continued this week when it was announced that he had been awarded a two-book publishing contract for Christian Faith Publishing.

Proby, who started to write after spending two years of solitary confinement in prison, has written 19 self help books, including two through Redhawk Publishing.

“Words cannot be expressed of the joy that I feel and the humility that I have for all of CVCC who helped make this possible,” said Proby, who lives in Charlotte, NC. “Writing started as just a form of therapy that led to me creating self help books. Things like this (publishing contract) don't happen to people who come from were I come from, but the grace of God has shown me different.”

“CVCC believed in me. That plays a major role coming from prison,” Proby said. “It is hard to get a person to believe in you when something like that happens, and they believed in me. I was connected to Redhawk Publishing through CVCC’s Office of Multicultural Affairs by Steve Hunt, and from there, it was history.”

The contract with Christian Faith Publishing allows Proby — one of the first outside authors for Redhawk Publishing — the ability to reach thousands of Christian bookstores across the nation and world.

“This is the newest precedent set in our mission statement,” said Robert Canipe, Editor-In-Chief for Redhawk Publishing. “We have nursed a project to fruition, created an artifact for the client to circulate and now he has earned a national distribution deal with a traditional, large publisher. This proves that this initiative does for art and information that the Manufacturing Solutions Center does in Conover for hard products.”

“Redhawk Publishing was created for one purpose — to deepen our role in our community for preparing future success for our citizens and to create stories that resonate in the community, the region, the state and the nation,” Hinshaw said. “This effort has been an extraordinary journey, but with the commitment, perseverance, creativity and passion of Richard Eller and Robert Canipe, we are seeing the evidence of what innovation looks like here at Catawba Valley Community College.”